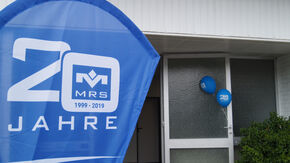 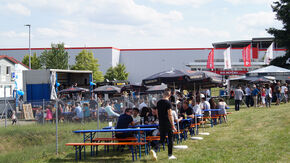 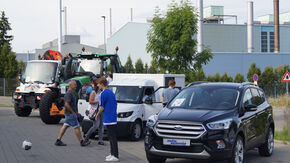 Over the past 20 years, MRS has developed into a strong medium-sized partner in automotive & vehicle electronics. The number of employees, company space and turnover have risen continuously. But growth is not just about luck. It is based on a good team and strong products.

A strong team
The risk behind it was great. The trust in the then 20 employees was greater. And courage was rewarded. We have done a lot right in the past, otherwise we wouldn't be where we are today in this relatively short time", says Bruno Merz, Head of Administration. The great success is only possible with competent and motivated employees. The employees are the most important capital of a company," says Günther Dörgeloh, managing partner. Today the company has more than 200 employees.

The recipe for success
What distinguishes MRS is its working style. "We always deal openly and fairly with customers, suppliers and employees. This may set us apart from other companies," says Bruno Merz. At MRS, the customer benefits from clear added value - everything from a single source. Due to the constant growth, the employees were able to acquire a lot of knowledge. For example, there are specialists for many topics so that one can concentrate even more on customer requirements. MRS also invests a lot in the future.

Worldwide network of partners
In the meantime, MRS has built up a worldwide network of international partners. In addition to the main location in Rottweil, sister companies in the USA, Croatia and the Ukraine have been added. With a commercial agency in France and 8 worldwide sales partners, customer enquiries from all over the world are covered.

Anniversary year - outlook 2019
The jubilee year 2019 brings a lot of new things with it. The 32-bit CAN generation presented at bauma is the beginning of a new technology wave. In August / September, the new 3500 square metre building at the main location in Rottweil will be occupied. With the three-storey complex, the previous company space will be doubled. In addition to AGRITECHNICA in November, MRS will also be exhibiting for the first time at an international trade fair, busworld in Brussels, in October.

Full of confidence for the future
Electronics is a growth market - promising for the future. MRS therefore looks to the future with self-confidence: "Many ideas and visions are already in the company and in the minds of its employees. In the next 20 years, we will position ourselves even more broadly and internationally," says Günther Dörgeloh.

MRS Anniversary Summer Party
As part of the 20th anniversary of MRS, a big summer party took place on 19th July. More than 470 people came together with employees and family / friends as well as business partners to celebrate on the MRS grounds. In addition to company tours, food trucks and a children's programme, there was a large vehicle exhibition with vehicles from various areas in which MRS products are used. The band Maria & die Tschäntelmän provided a lively atmosphere in the evening.